I met Anthony Winter 19 years ago, the day we started a foundation course in Art and Design at Somerset College of Arts and Technology.. Or SCAT as we all called it. He had dreams of car design and already had a burning passion for reviving old VW’s, completing 4 years of work on a Beetle just before I met him, and I wanted to be an Illustrator. That’s us in a photo booth circa 1997.

Ant is one of the most creative people I know. His work stuck in my head: The bicycle he brought to college painted like a Friesian cow edged all over with favourite song lyrics, the illustrated letters, the pair of polystyrene Lobster claws he made me once, the cool dude painting that was a clock (I think!?!?) in the final show, the camouflage jiffy gift bag I got through the mail for my birthday.. If camouflage is yellow and metallic purple!! And the passion for cars!

Nearly 20 years goes by, (somewhere in there my Dad builds his Mum and Dad a reclaimed pine kitchen that’s till going strong!) Ant starts his own business, Kustom Revival, specialising in everything from general servicing and repair, to complete nut and bolt resto’s. Engine and drivetrain conversions, bodywork repair & paint. Custom fabrication, interior work & everything else in between.

Me? Well, most of you know what happened there… I did become an illustrator ‘til I realised how dull it is and went for my other dream, music! But all the while I’m holding on to another plan: To go back to Ant (when I have made enough money from my chart topping album!) and do a project with him. Maybe a Beetle, maybe a camper… When I started working on Luna I didn’t even think to involve Ant – It wasn’t a VW!  But as the technology involved got the better of me I realised I needed help. One day I dropped him a line and asked if he knew how to fit some gadget I wanted to install. ‘Yup’ he replied. Then I asked another question, ‘Yup’.  And another, ‘Yup!’

So that was it. Never mind that I had asked for tenders from 3 other companies. If Ant knew how to do this job, Ant was doing it. And how much fun it would be to catch up after so long! Even though it didn’t feel like that long – You know how it is, you don’t see folks for a decade but letters and emails, then later facebook and instagram, fill in the gaps.

Whilst I was in France Ant and I thrashed out what I needed electrics-wise and got on to ordering stuff sending most of it straight to his workshop.

I was so excited when I turned up as his workshop early Wednesday evening. Luna having her electrics done was one thing but catching up and working with Ant on my van was a little dream come true! Okay my album hasn’t (yet) topped the charts and it’s not a VW but hey, the manifestation of your desires don’t always look the way you think they will!

With some expert manouvering from me and Luna, and some jacks and kick skates from Ant we got my massive beast of a vehicle into the workshop ready to start work the next morning. Then we headed back to Ant’s where I met his wife Cindy and two adorable girlies. They kindly let me stay because we would be taking Luna apart: Wheels off, jacked up at angle, bed mattress stowed in proper VW campervan to protect it, bed slats rolled back for access to the electrics cupboard – She was not habitable! But that meant I got to know Ant’s lovely family and that was really great! 🙂

Ant and Cindy’s girls aged 4 and 2 are super duper Frozen fans (of course they had a Frozen party once with a brilliant 7ft Marshmallow Man Ant painted) and so am I, so they wanted me to sing Let It Go for them. I was only too happy to oblige but whilst I have learnt that song to sing I hadn’t learned the guitar parts so one afternoon while Ant was working and I had finished my own jobs, I sat in the van and learnt the rest of the song for them. I left my capo in Ickford so I had to improvise a little with what I could find around the workshop, clamps to the rescue! I managed to give them a (slightly dodgy) 8am croaky version the next morning!

We spent 3 and half days on the van in total.. When I say we, really I mean Ant did all the complicated electrics, opening up the engine, running wires underneath to the back and connecting my leisure batteries. Installing a 12v system, a 240v inverter system, and 240v mains hook up as well, connecting it all to my existing electric circuits. He also rewired my stereo to my leisure batteries so that I could use the stereo independent of the engine. I have been known to run a battery flat just listening to music!

I wired a few sockets and switches but mostly I did other stuff like painting and fitting yet more catches and bits and bobs I hadn’t managed in France. Oh and I made sure that we had lots of tea, and breakfast!

Despite Luna being all upside down and wotnot, we still made use of her dining room – ‘Til I snapped the table in half using it as a day bed (the wrong way round) and had to repair it again. Doh!

All the while we were working on Luna in the first couple of day there was this incessant cheeping.. A family of Robins had nested in the workshop and the babies were just beginning to take flight… I snuck up and managed to take this pic of young robin with crazy feathers sticking out the side of his head like trumpets (look very carefully).. And then they were gone, flown the nest and the workshop and all was quiet again.

It got really hot while I was at the workshop which was great.. who doesn’t love a hot summer!? Temperatures in the van hit 29 degrees! But then I learned all the things in the van that needed heat proofing. Everything that had glue basically. All my sticky velcro melted in the heat and fell off. Even my satnav fell apart. The solution? I drove up to Scotland where the weather is miserable and reset it all. Lol. No seriously. I replaced the glue with suction pads. Much better.

Anyway… So now I have lights! And I can run my laptop and tv/dvd player and various other electric gadgets, the water pump is properly hooked up and pumping, which means fully running water. Oh yes, and my fridge! That means ice cubes… which means gin and tonic! Yaaaay!!! Though the tonic water was flat by then, not so yay.

We slightly under estimated how long it would take to do these works and ended up doing it in two instalments, working very long days, again! I didn’t mind. Ant’s workshop is in a beautiful location, (you saw the views right!?) where I stayed in Luna one night (awoken the next morning by the revving of a Ferrari in the neighbouring bodyshop), and I’m happy to get this done at all! Did I say two instalments.. We haven’t actually finished. I have to pop back yet to add the solar panel to the roof and enclose my gas cylinder in a special steel cabinet Ant is going to make me.

Anyway, injuries-wise um.. I think Ant managed not to damage himself (except for being overworked by me) but I had a run in with the door. Literally. This was my worst one yet, worse than falling out of the van head first. I sprouted a bump on my head that felt like I might be turning into a unicorn and the awful bruise on my arm raised a few eyebrows when people have asked what happened and I answered ‘I walked into a door’. But honestly, I did! Or more of a bounding leap. There’s even CCTV footage to prove it!

Anyway, I’ve had a fab time in Luna with her newly installed electrics. Lights, DVDs, running water, powered laptops and phones, extractor fans and icecubes! A proper campervan. What’s not to love?! I don’t yet know how long I can run all this before the batteries go flat. They are recharged from either the mains, the engine running, or the soon to be installed solar panel. I haven’t run them flat yet… and I watched tele for a long time last night! But I have do do a hell of a lot of recharge miles! 😉

I am hugely grateful to Ant (this pic circa 2016) for all the work he has put in getting electric Luna up and running. This is a major milestone in the build, she’s become truly liveable and that’s really something. Really something. There’s a few things left to do and then… The Great Reveal!!!!

One last thing. If you are thinking of reviving a vehicle, or customising it, and you live anywhere near Horsham, go see Ant at Kustom Revival. I couldn’t recommend him highly enough. Really. 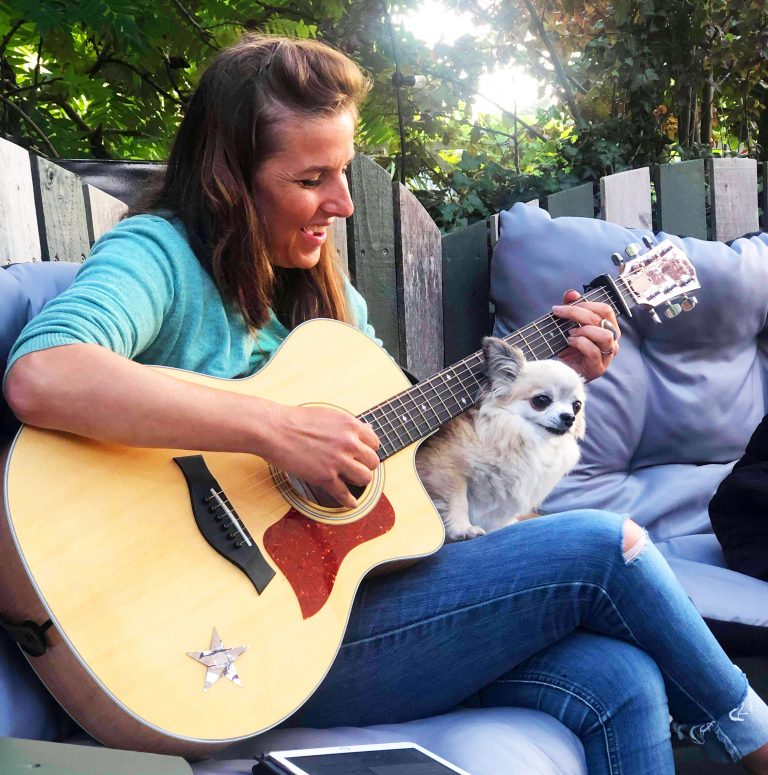